Extensive work on protein biophysics over the last two decades has unveiled a plethora of exceptions to the classical paradigm by which proteins fold into unique 3D structures in single strokes (two-state folding) and bind to their partners by simple structural complementarity (lock-and-key binding). We now know that a significant fraction of the proteome corresponds to proteins that are intrinsically disordered in their physiological stage. Intrinsically disordered proteins (IDPs) are able to fold upon binding in a process that may provide kinetic advantages and result in complex binding phenomena such as induced-fit and conformational selection. Some IDPs morph upon binding to structurally diverse partners, and others exhibit sophisticated allosteric behavior.

However, there is no quantitative understanding of the molecular mechanisms that lead to the striking conformational features of IDPs. The delicate interplay between folding and binding that must take place in these proteins, and the relationship between folding mechanism and complex binding behavior, remain unanswered questions as of today. There is even no mechanistic information on how the binding of an IDP to a partner influences its binding to other partners, or of how conformational disorder is related to allosteric binding behavior. 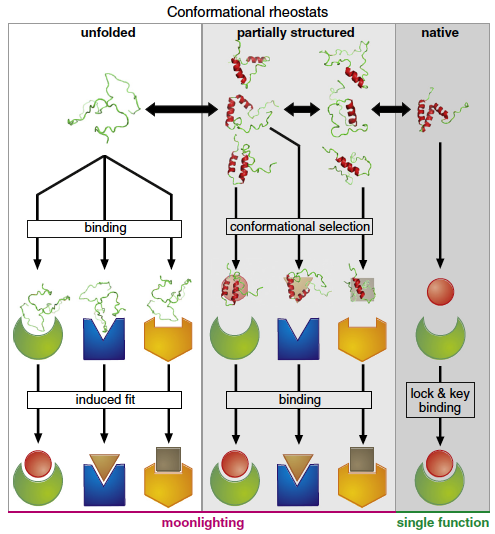 In this regard, our group has recently found a direct link between our previous research on fast, non-cooperative (downhill) folding and the marginal stability of the native fold that leads to intrinsically disordered proteins (Campos COSB 2016). This connection explains the structural malleability and complex binding modes found on IDPs in terms of an underlying downhill folding mechanism, which allows the protein to operate as a conformational rheostat. In contrast to the binary patterns of conventional molecular switches, the idea is that conformational rheostats will be able to produce analogical signals, thus opening a new realm of possibilities for the fine control of protein function.

We are very interested in examining the validity of this hypothesis and investigating the roles that conformational rheostats may play in fundamental processes in Biology, most particularly in complex protein-protein interaction networks. Our current efforts focus on two specific systems: 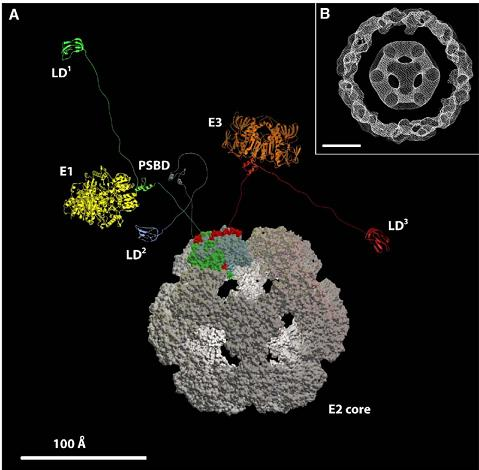